Hey everyone,
Another day, another release! Today’s treat is the first chapter of Onda Chiro’s “Koisuru Naked Girl”.
It’s pretty interesting, even if the plot leaves something to be desired. Still, it’s an erohon, so what
do you want, Mark Twain?

Enjoy reading! Tomorrow’s release will be “Her True Colors” chapter 1, so expect the next chapter of KNG
on Thursday.

Until someone explains what people mean when they talk about some special method to ensuring your links stay up on Media Fire, I’ll be using Save File and MU. If you know what this is about, please drop me a comment. 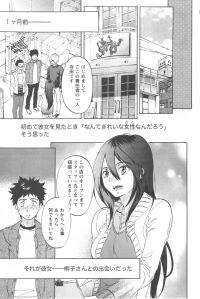 As per request, I’ve made a high-res version of Tayu Tayu chapter 9. I’m releasing this for our ero-aficionados, specifically for the two double-page shots. I’m not making any further changes to this – any further corrections / updates will be to the original release. Enjoy the pics!

The dl link is on the chapter 9 page.

By far the hardest doujin I’ll be translating for a while.
Fun, nonetheless. Thanks to Raven for suggesting it. Enjoy it man.

I know the resolution leaves something to be desired, but that’s how they came on Danbooru.

Also, there were some notes about phrases that I didn’t want to add an extra page to explain. They go as follows:

Pororokka – I have no idea what this means, but it’s used as an adjective to describe aliens. *shrugs*

RasuBosu’s Benishiro clothes – Benishiro is an NHK-hosted Enka / dance event, and RasuBosu is either a person or group who designes clothes for the singers. They’re pretty garish looking, from the few pictures I found.

Taspo – This is pretty interesting. It’s a card you can get upon turning 20 that identifies you as so to cigarrette vending machines, and other authority figures alike. It’s being touted by the government as a step towards eliminating underage smoking. Apparently not everyone shares their optimism.

(9) ( like a nine in a circle) – this is apparently a Touhou fan inside joke about a character, Cirno, who’s even portrayed by ZUN (the creator of Touhou) as being an idiot, thus eventually making (9) / Cirno/ “Nine-Ball” synonymous with ‘idiot’, for Touhou fans.

This is my second translated work,

Credits to Rally T. for raws, and /h/ for support!

Thanks to Rally T. for the raws and translation advice and assistance.

Welcome to the launch of my blog!

Here I’ll be posting links to doujins and mangas I translate here, as well as links to other blogs and useful/ interesting websites.